As Easy as Baking a Cake - Fr Alan Neville MSC in South Sudan.

As Easy as Baking a Cake – Fr Alan Neville MSC 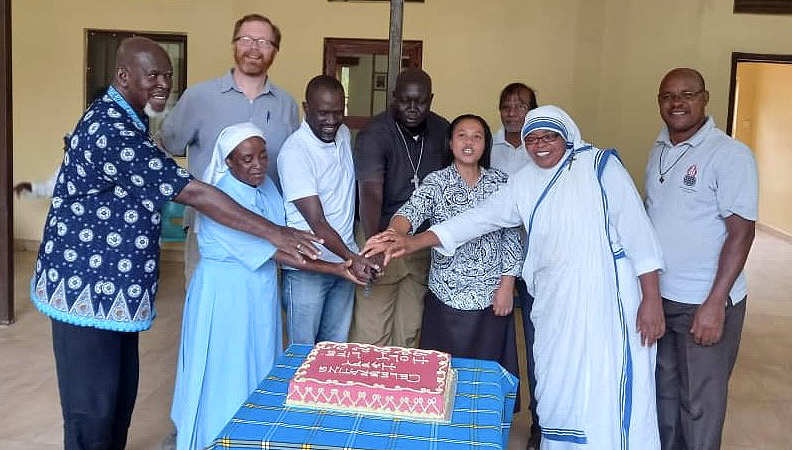 The biggest dilemma at the start of the month was figuring how to fit the words ‘Celebrating Religious Life’ across a cake. It was for the second of February, the World Day of Prayer for Consecrated Life, when the Church acknowledges in a special the contribution of sisters, brothers, and religious priests in the building up of the Kingdom of God.

In the Diocese of Rumbek, we are a broad church with missionaries from around the world working alongside local diocesan clergy and our lay teams. There are sisters from the Missionaries of Charity and the Evangelising Sisters in Cathedral parish, as well as our own Loreto Sisters, along with the brothers from De La Salle community just up the road in their new school for boys. You also have the Jesuits, the Spiritans, and of course one Missionary of the Sacred Heart who wandered in a few months ago and everyone has been too polite to ask what he is actually doing there in the first place.

In all we have over thirty religious sisters, brothers and priests from all across Africa, Asia, Australia and Europe. The ministry that they are involved in includes the usual schools and clinics that are usual in name only. The issues they face and the challenges they meet are well outside the norm of what we typically deal with in the West. This morning the Missionaries of Charity are going to a leper colony an hour outside of town. The Jesuits are setting up an English language course for their adult education programme and are trying to encourage as many women as possible to enrol to improve their future employment prospects. The Loreto sisters and the team in our clinic are getting ready for a possible surge in Covid cases, even though we have no testing kits and there are only four ventilators in the whole country of 11 million people. None are in Rumbek.

As for myself, I’m still working away on the local language. We had our first Children’s Liturgy last Sunday morning and when I enthusiastically greeted the kids in Dinka there was stony silence. Not a single word. Nothing. Then when one of the students said 100% exactly what I said they were beside themselves with excitement. When I said it again, I got nothing! Afterwards the student said I was doing well, but politely recommended that my accent needs a bit of work. I suspect she is going to be an excellent, if somewhat demanding, teacher one day! 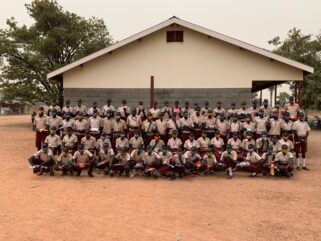 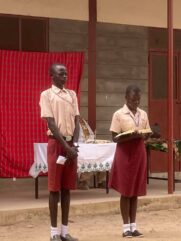 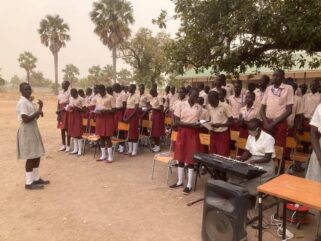 Last Friday we had another wonderful celebration. The children from Year 8 graduated from Loreto Primary School and this very week they will sit the national exams. They are another group you will need to add to your prayers. Seventy-two boys and girls successfully completed their studies. When I spoke with them during Mass, they talked about how their first lessons took place under a large tree in junior infants. It has been a long road and a tumultuous few years, but they persevered. Despite the school’s best efforts many students dropped out along the way due early enforced marriage or the need to go and work to support their family. Still the number of those who persevere continues to grow and education is increasingly seen as the key pathway out of poverty to a better life.

At the graduation Sr. Orla, the Director of Loreto, and Mr. Yuga, the Compound Manager, presented the children with some stationery supplies for their exams and a Bible. In the homily of the Mass, I explained that in life they could go anywhere and do anything as long as they remembered that their education was their passport and their Bible was their guide for the journey. It was day of real thanksgiving for all that was achieved and touched by sorrow as the students will now go on to different schools.

We hope that most of the girls will continue into Senior 1 in Loreto Secondary School. Many of the boys will join the De la Salle Brothers in their school or go to the Comboni school in town run by the Evangelising Sisters and the Diocese. Education is a foundational ministry and one of a number that the sisters, brothers, and priests carry out. As for the cake, well the decorator ran out of space and decided that Celebrating Holy Life was grand. On reflection we all agreed.