Cyclone Aid in Pemba, Mozambique - Missionaries of the Sacred Heart

In March and April of 2019, two cyclones rampaged through Mozambique, causing severe damage and untold distress. As local communities begin to pick up the pieces and rebuild their lives, our MSCs in Mozambique are appealing for your help.

“Our house and most of our belongings were taken by the wind and the waves.”

“We have lost everything,” says one survivor. “Our house and most of our belongings were taken by the wind and the waves.”

In 2018, MSC missionaries from Brazil began a new mission in Mozambique, in the Pemba diocese. They began construction of a house from which they could undertake their ministry and parish outreach, and immediately began working to bring positive change to the district.

The MSC mission project in Pemba had been several years in the planning, focusing on bringing life-changing support to the diocese – an area suffering from extreme poverty, with no church infrastructure or functioning pastoral ministry.

Fr Angelo and Fr Eduardo, both from the Sao Paulo Province, arrived in Mozambique in early March 2018. Accompanied by their Provincial Leader, Fr Edivaldo, and MSC Superior General Fr Absalon, the group were welcomed by the Bishop of Pemba and a number of pastoral workers from the diocese. 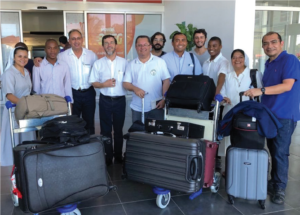 Our missionaries had already begun working to rebuild this struggling community; today, however, in the wake of these disasters, the people of Pemba need our help more than ever. Our MSCs are doing what they can, but with supplies limited in the middle of a disaster zone, they are in urgent need of emergency aid. Our support can help to save lives.

PLEASE HELP US TO SAVE LIVES IN MOZAMBIQUE