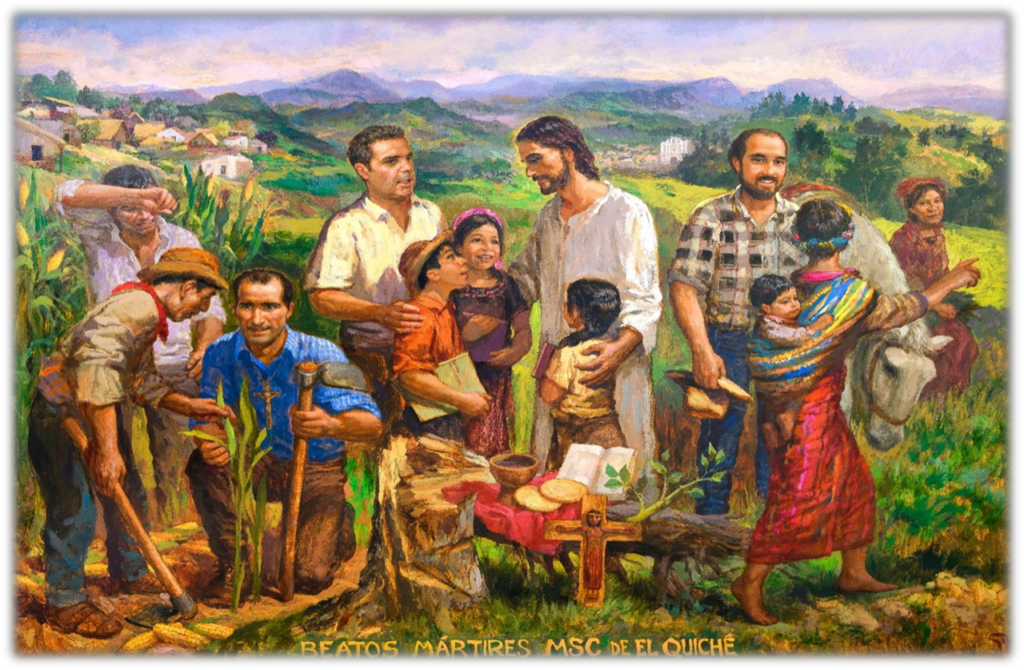 Blessed are the martyrs of El Quiche Guatemala. Faith’s response to injustice.

Ten missionaries, priests, catechists, pastoral workers and also a 12-year-old boy are raised to the altars. Their engagement was against violence during the civil war.

It was a day in August 1995. The farmer was working in his field, as usual. The hoe inadvertently moved a stone, stuck in the dark earth. It was then that he noticed the strange object: a closed book in a plastic bag. With difficulty, on the thick black
cover, he can still read the golden writing: “Holy Bible”. The photo of its ruined pages, on display at the Human Rights Office of the Archdiocese of Guatemala (Odha), is the most authentic memory of the civil war that bloodied the nation between 1960 and 1996.
Genocide took place in the highlands of Quiché: tens of thousands of civilians were massacred. Women, men, children and old people; the overwhelming majority poor and indigenous: a tragically “normal” situation in a country where poverty has the colour and
features of the Mayan people. A people, however, deeply believing, capable – riding the wave of the teachings of the Second Vatican Council, of the Latin American Bishops’ Conferences and of the work of evangelization carried out by Catholic Action – of reconciling
the Gospel and their daily commitment to the construction of the Kingdom. Thus was born the prophecy which incited priests, bishops, laity, catechists and pastoral workers to denounce the vicious system of exclusion fostered in the blood by the small land elite
and its representatives in the military governments. It was enough to have a Bible in the house to be tortured and killed. Violence has not extinguished faith. The sacred books and symbols were buried, but people continued to read and pray them, in secret.

“They buried the Bible, put flowers and candles in it,” says Fernando Bermúdez, a missionary for thirty years in Guatemala with his wife, theologian and author of digital religious affairs. In the evening, the community met there to remember certain passages,
thus resuscitating the Word. Witnesses to the end. Like the Spanish priests, the Missionaries of the Sacred Heart José María Gran Cirera and Juan Alonso Fernández and Faustino Villanueva, the sacristan Tomás Ramírez Caba, the catechists Rosalío Benito Ixchop,
Reyes Us Hernández, Domingo Del Barrio Batz, Nicolás Castro, Miguel Tiu Imul and Juan Barrera Méndez, just 12 years old. All murdered in hatred of the faith between 1980 and 1991, as recognized by the decree which Pope Francis authorized for promulgation on
January 24. And as such, they will be beatified today at the Rosary Institute of Santa Cruz de El Quiché. The Mass will be presided over by Cardinal Álvaro Leonel Ramazzini Imeri, Bishop of Huehuetenango.

The city is decorated with flowers and murals for this great celebration that not even the pandemic can erase. “It is a recognition of the faith of the people of God who go on pilgrimage to Quiché. There, the Church was persecuted, paradoxically, by “co-religionists”.
“The soldiers and paramilitaries who massacred civilians and tortured priests and catechists professed to be Catholics. To justify themselves, they accused the victims of being subversive and communist. Nothing is further from the truth. Their non-violent defence
of the dignity of the oppressed was rooted in the Gospel “, explains Nery Rodenas, director of Odha. It was precisely this latter office – created by Juan Gerardi, longtime bishop of Quiché and also a victim of death squads – that exposed the “official lie”
of the “Nunca Más” (Never Again) report. A meticulous work of reconstructing the historical memory by collecting testimonies on the ground: 6,000 arrived from Quiché alone. “I accompanied the future blessed Nicolás Castro and Reyes Us. One day, they asked me
to help them hide consecrated hosts in a container with corn husks. It was the only sure way to take them to their villages, a day’s walk away. They knew they risked horrific death if found. But they told me that neither they nor their communities could renounce
the Body of Christ”, Bermúdez remembers. “They killed Nicolás on the night of September 29, 1980: a commando broke into his house and tried to kidnap him. He resisted and they hit him with three bullets in front of his wife, mother and children. He was 35.
Less than two months later, it was Reyes’ turn.” “The example of these martyrs”, concludes Rodenas, “prompts us to work with an even greater impetus for the truth and justice of the Kingdom, for which they lived. And for which they died.”