On August 12th, the Indonesian Province of the Missionaries of the Sacred Heart officially welcomed 25 young men to their Postulancy Programme in a beautiful Eucharistic celebration, held at the MSC Skolastikat Pineleng Chapel in North Sulawesi, Indonesia. 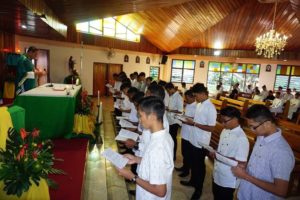 The Ametur MSC Facebook page shared photos of the event, noting that the homily was celebrated by Fr Hubert Berry MSC, who spoke inspiring words of motivation and encouragement to the young postulants. “Surely, there will be many challenges and struggles,” he said, “but don’t worry – you are not alone.”

“Be confident, and rely on Him,” continued Fr Hubert, “for He will never leave you.” 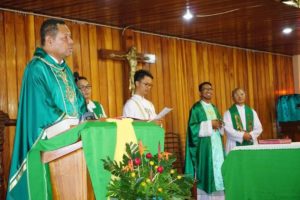 Last year, Indonesia fell victim to the devastating effects of a series of natural disasters, with over 2.4 million people affected in all.

In late September 2018, an earthquake and tsunami killed almost 2,300 people across the regions of Palu, Sigi, and Donggala. A massive earthquake with a magnitude of 7.5 hit the Sulawesi province, which in turn generated a deadly tsunami with waves measuring up to 10 feet high. Just a few days later, in early October, a volcano erupted in North Sulawesi, spewing lava and ash 19,600 feet into the air. Floods, landslides, and mudslides destroyed homes, buildings, vehicles roads, and bridges. Children were separated from their parents and families were torn apart. Over 220,000 people were displaced from their homes, and over 1,300 people were reported missing.

A short time later, in late December, a ruinous tsunami swept along the Sunda Strait, injuring over 14,000 people, and causing further catastrophic damage to homes, businesses, and the local landscape. 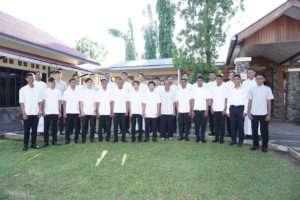 MSCs in Indonesia provided emergency response throughout this terrible time, and are continuing their work as they help devastated families as they rebuild their lives and livelihoods following this series of disasters. The official acceptance of 25 young men to this year’s Postulancy Programme is testament to the wonderful work done by the Indonesian Province of the MSC, and we keep these young men and their leaders in our prayers as they embark on this new and exciting journey.