Festival of Mercy in the Big City 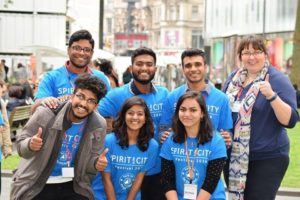 It’s June, so that means it’s time for the Spirit in the City Festival in the centre of London. It’s based in the parish of Notre Dame de France, home of the wonderful Marist Fathers and their passionate team of laity. Over four days of music, cinema, outreach, and liturgy we reached out to the 250,000 thousand who pass through Leicester Square every day. 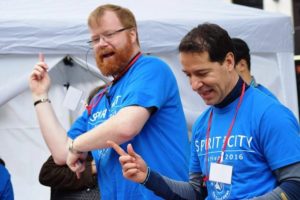 We started on Wednesday with the European premiere of Full of Grace in the Prince Charles Cinema. It normally holds Rocky Horror Picture Show sing-alongs and John Carpenter retrospectives (I was at one the month before – Big Trouble in Little China is a classic!). This was something entirely different. It was a reflective, prayerful film on the life of Mary after the Resurrection. I was on usher duty, which was no mean feat, as we had a full house. The movie was followed by a discussion of the role of Mary in the early Church and her continuing impact today as an example of Mercy. 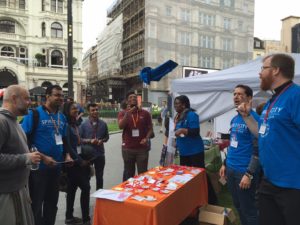 Thursday and Friday were days of street outreach and playful reflection. Teams from a number of different communities went out into the heart of London to share their faith and to invite people to visit the Church, where there was music ministry and exposition of the Blessed Sacrament.

All of this was to build up to Saturday. That was the day we took over Leicester Square, one of the busiest, most cosmopolitan areas in the world. It’s a modern day Areopagus, and like Paul we spent the day speaking with people about the joy of the Gospel and the Year of Mercy. We had live music from Noon until 8:00pm, finishing with a concert by the Noel Robinson Band. During the afternoon there was Adoration, prayer ministry, opportunities for Reconciliation, face painting, and more than a little clowning around.

Spirit in the City is what our faith is meant to be about. It’s courageous, joyful, and above all this year, merciful. It brings out the best in our diverse in wonderful Church and seeks to share the wonder of what our faith is all about.