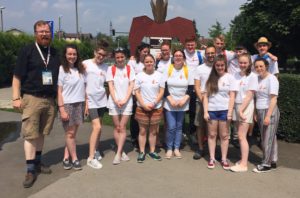 After an amazing week with the parish community of St Mark’s outside Warsaw we finally arrived in Kraków. There we were joined by Sarah, Anne Marie and the pilgrims from our Dublin a Parish. Our hotel was already full of Malawians and Canadians pilgrims, giving you an idea of the wonderful diversity of World Youth Day. The following day was about getting ourselves orientated and making our way to the Blonia, where all the big events in the run up to the WYD would take place. 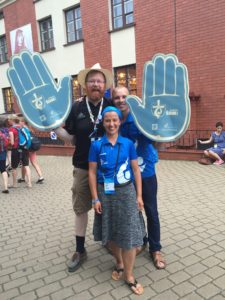 The opening Mass and the concert that followed were full of joy and music, but it was the journey home that I remember. There were conga lines of every nationality making their way back into the city centre, as well as high five relays with Polish seminarians. As with every other WYD I’ve been to, the train stations get packed, but the atmosphere is always good humoured.

The following day was our first session of catechesis in the local Sacred Heart Parish (no relation). The Sacred Heart Fathers there (still no relation) were delighted to have us. They were so organised that they had a dedicated medical team for us. On top of that they told us that during World War II the first and second floor of the building was occupied by the Nazis, but they still ran an underground seminary in the attic. The catholic faith runs deep in Poland. 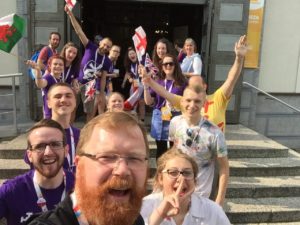 Getting ready for catechesis

During the catechesis a number of bishops shared their stories and insights with the youth. The worship team keep everyone full of energy with their prayer and worship, while the priests celebrated the Sacrament of Reconciliation outside under the shade of the trees. 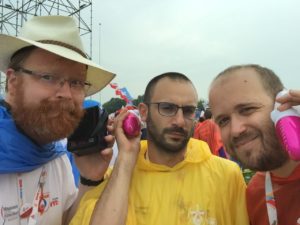 MSCs tuning into what Pope Francis has to say

On Thursday evening we went back to the Blonia to welcome Pope Francis. As you can imagine the atmosphere was electric. He welcomed everyone and spoke of what the youth had to offer our Church. On Friday we were back at the Blonia for the Stations of the Cross. They were spread throughout the crowd and were done with great creativity. 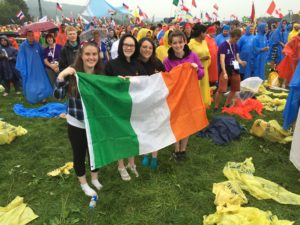 Flying the flag for Ireland

On Saturday we left our hotel at 7:30am for Mass the following day. Sounds a bit extreme, but this is World Youth Day we’re talking about. We had to walk 8km to Campo Misercordia, a short hop in comparison to some other pilgrims. We collected our food for the two days, passed security (where my Communion wine was confiscated – I must have looked especially shifty!) and were settled into our designated area for the Mass. 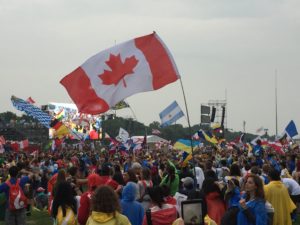 Just a couple of people hanging around, celebrating our faith

We were surrounded by people of every nationality and if the atmosphere during the week was good, now it was taken to a whole new level. We spent the day playing football, chatting with pilgrims from other countries and drinking slushies. We also managed to have a simple Mass in the middle of the field. The night was full of song and before you knew it we were starting the Mass. 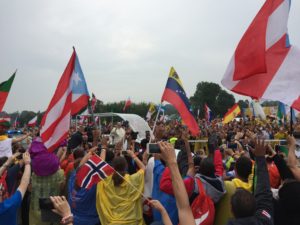 Throughout his visit the Pope challenged us not to be couch potatoes, but to get out there and make a difference. We had to witness to our faith. He spoke about the modern challenge of young people who are perpetually bored and who are in themselves boring. He said he wanted evangelists who were passionate and compassionate. What we have in our faith is a gift that needs to be shared. 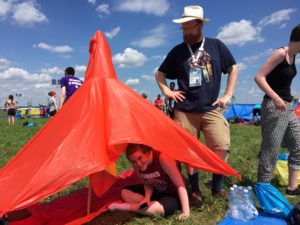 Shelter from the Sun in Campo Misericordia

The group was elated, but wrecked on their way back to the hotel. We were cooled off by a thunderstorm just as they got back. It was an easy day, simply hanging around and sharing experiences. The following day we reluctantly packed our bags and left Kraków behind. It was exhausting, but awesome in the real sense of the word. All we have to do now is wait three more years for Panama!